Post-Holocaust Pedomanumotive Power – During the early 60s, I was involved in a discussion, the basis of which was that everything had been done, both poles had been got to, Everest had been climbed, etc., there followed a long sad silence … then someone said: ” Nobody’s put a bike in a bottle!” A month later, I’D DONE IT … Sadly nobody was interested until, after an article in a local paper, a businessman came to see me. He said, ” If you can put a bike in a bottle, you can design a three-piece suite cheaper than anyone else!” I declined. He’s probably a furniture multi-millionaire now. I then continued to make model cycles.

Most of the cycles I built had a function other than for transport. I had the vague idea that I would put them in Cottingley wood and revive the Cottingley Fairy Story. I decided that the best plan was a book of photos that would complete the image of surrealism by giving the impression that they were full-size cycles, the idea being that the ‘finished object’ was the photograph, not the model cycle.

At this time, I was summoned by my bank manager to explain why I had an £8 overdraft … Yes, £8!
He asked me if I smoked or drank alcohol. – I replied “A little.” – He said, ” You must stop.”
He then asked me about other expenditures. – I explained that I spent £2 per month on steel to make my model cycles. – He said, “You cannot afford this hobby.” But then, he suggested that I bring a model cycle for him to see. Having seen one, he suggested an exhibition at that bank.

My cycle exhibition at the bank was a great success and led to two more, one at Woburn Abbey where the Duke of Bedford bought two cycles and one in London which led to my first television appearance on LATE NIGHT LINE UP with Joan Bakewell. This in turn led to my TV appearance on MAGPIE where I made cycles for the presenters … So, the original cycle photograph book was never published.
Wilf Lunn 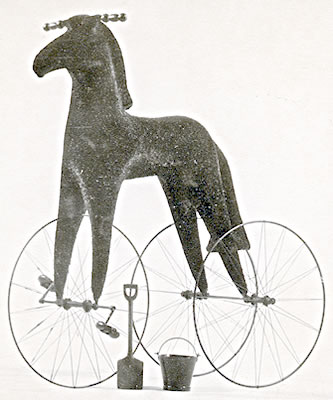 Ideal for a gang who wants to arrive promptly in good time for the bother to commence. Wilf Lunn’s Surreal Cycles | Tricycles | Bikes 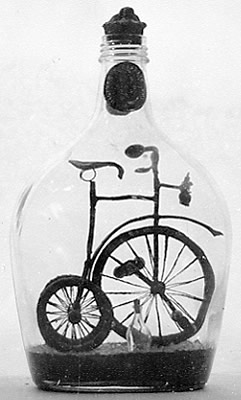 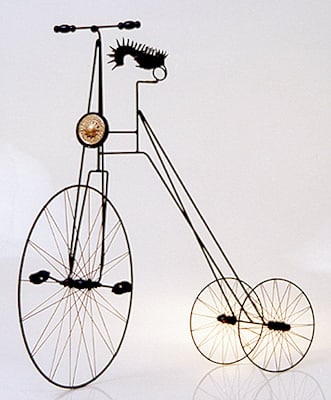 This cycle punishes the part of the body that has committed the crime. The electric version (not illustrated) delivers electric shocks to the testicles. In Scotland, crutch criminals were made to run 10 miles with a sporran full of rocks. 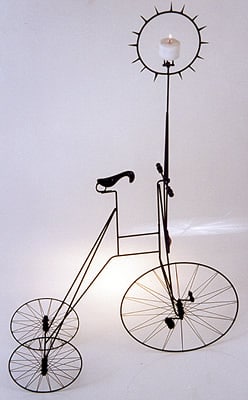 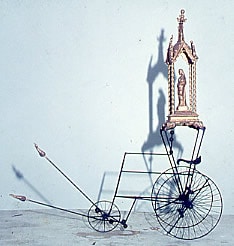 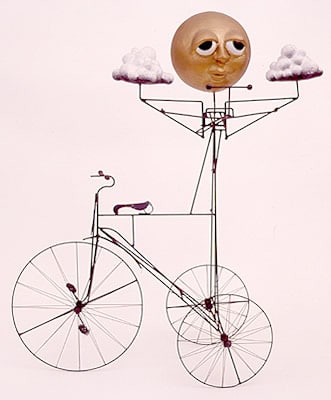 The curiosity of the bird is aroused by the low sun. The bird flies down to investigate and is squashed by the heavy-duty clouds smacking together. 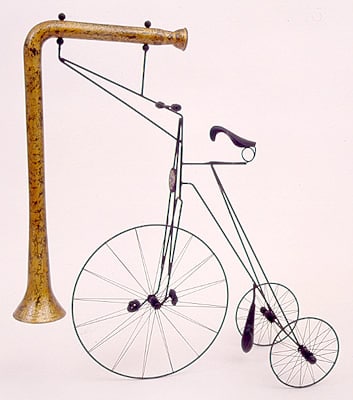 No more grazed stomachs. This cycle is a must for persons allocated a ‘Low Breather Area’. It emits an officially recognised low breathing note, effectively warning other Low Breathers away from your own breathing area! 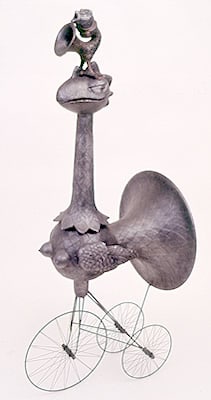 When speaking through the bird’s mouth the voice is amplified through the tail. The breasts enable the rider to find the front in the dark. 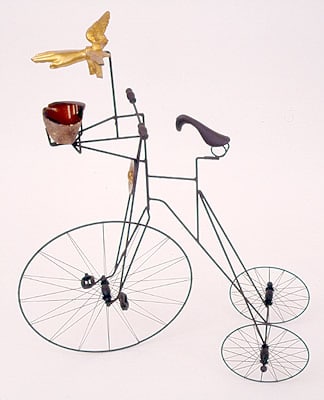 Blessing the Stone which is about to be cast. Wilf Lunn’s Surreal Cycles | Tricycles | Bikes 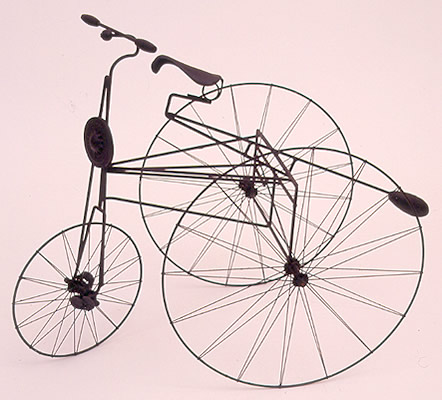 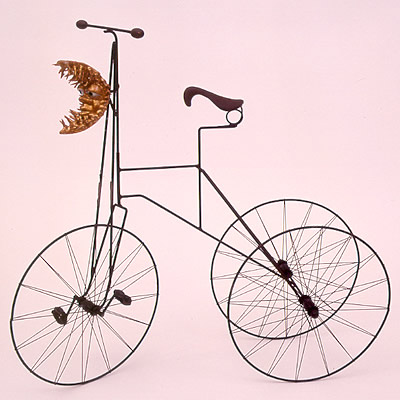 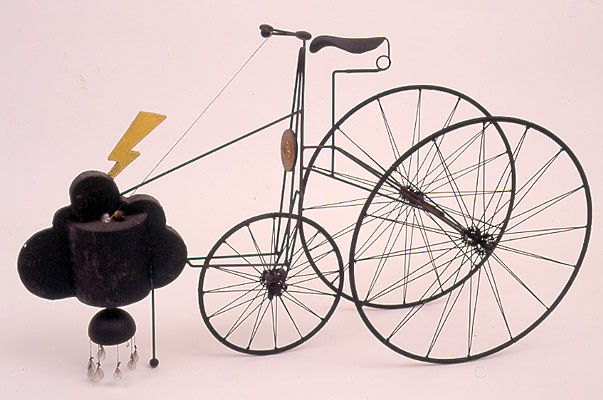 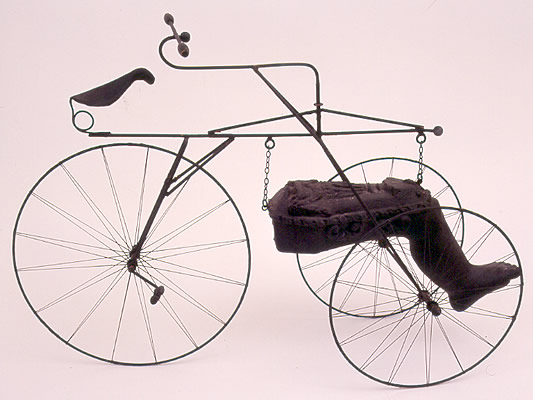 Saint Salio is, of course, the Patron Saint of Hopping 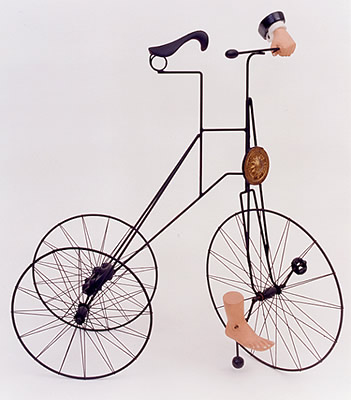 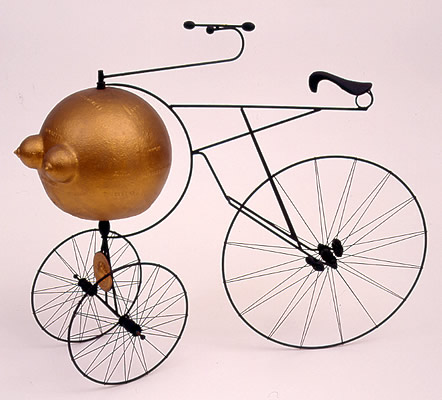 (When this was shown on BBC TV, it had to be covered with a bra and pants) Wilf Lunn’s Surreal Cycles | Tricycles | Bikes 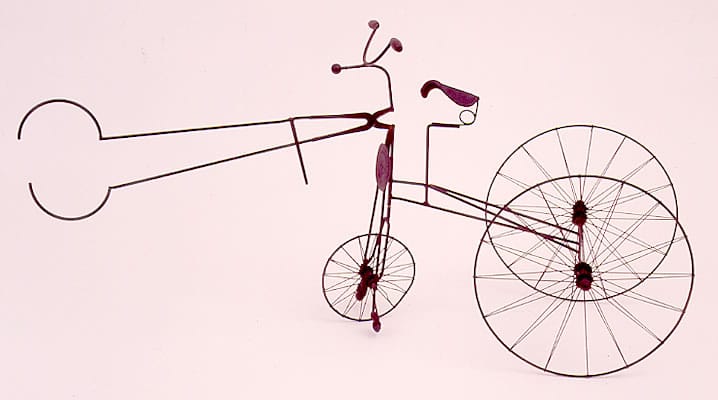 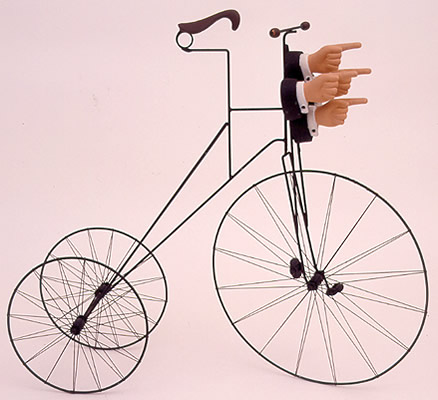 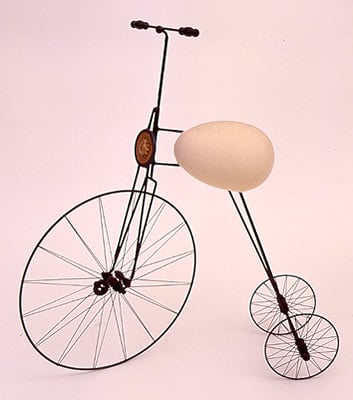 Superior Egg of the Week Cycle

Used by farmers to encourage hens to lay larger eggs.

Wilfred Lunn – Ansdell Gallery
Ideas given surrealistic form can so easily be inert, vulgar, or pretentiously overwrought in both the psychological and physical senses. The exact opposite is the case here. Wilfred Lunn, ” an art teacher by profession, an inventor by inclination”, has found a perfect vehicle (pun intended) for his ideas about the daunting fact of existence. His little pedal cycles (averaging between one and two feet high) integrate two qualities exactly fulfilling their creator’s intention – a sense of cool mechanical precision, and a wise, sly, sentient “biological” rightness, inevitability. Their refined visual elegance is no doubt due to the discipline imposed by the necessity to express ideas within well-defined formal limits. Painted a mat metallic black these small mechanically functional devices accommodate their surreal, Heath Robinson appendages as neatly, purposefully, as a rifle accommodates a bayonet. On a bicycle intended for clerical use, a pair of pedal-operated hands dispense mechanical Episcopal blessings. Elsewhere a spiked harness refurbishes medieval ideas in the role of a Fat Child and Reluctant Pensioner Exerciser. The humour very English, while not always as savage as this, comments with invariable elegance, sardonically, upon humanity and its often preposterous institutions. Incidentally, the descriptive titles of the cycles’ specific functions are a necessary part of one’s full appreciation but are mostly too lengthy to quote here.
Richard Walker. 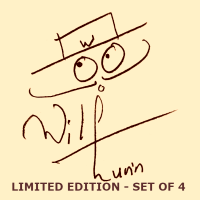 Please note: * The high quality of the photographic images on the prints cannot be reproduced on the website.

Please note: * The high quality of the photographic images on the prints cannot be reproduced on the website.

The four prints contain photographs of and text describing: